Posted on November 5, 2017 by Jesse Barksdale

Stockholm – Today marks my fourth morning in Stockholm, and it’s bizarre to realize that my Finland days are, for now, behind me. A little more than two years ago I left my job in Santa Monica, California, and moved to Finland to begin school. I knew exactly zero people in Finland, and had only one friend on the entire Eastern hemisphere of Earth. I’d have to build an entirely new life from scratch. It was simultaneously daunting and exhilarating.

I was depressed, off and on, for a long time after arriving in Finland. For weeks I had no home, staying instead in a hostel where I’d regularly have my sleep interrupted by herds of screaming tourists. On days when I didn’t commute an hour each way to school, I’d huddle under the covers of my rickety bunk bed, watching Netflix and eating ice cream candy bars like a proper Bridget Jones. But over time I found friends, girls, an apartment, and the numerous other bits that taken by themselves are small, but taken together form a life.

A week ago, my girlfriend and I held a Halloween-themed going away party. It was surreal to see how many people came, to realize that nearly all of them were friends I’d made in the last two years. People that in a short time had, really, become my life. They were people with which I’d made games, road tripped to the Northern peak of Finland (and thus, to the Northern tip of the world), camped at summer cottages, and explored the bars and parties of Helsinki.

But, unfortunately, nothing is permanent. And maybe it shouldn’t be. In the last two years, I’ve grown more as a person than I’ve grown in my entire adult life. So much of that growth was the result of the difficulty of coming somewhere new, somewhere so drastically different than the places I’d known before, and being forced to build a new life. So, while I’m sad to say goodbye to Finland, I view my move to Stockholm as the next opportunity for growth. I view Stockholm as a new home waiting to be filled with friends and adventures.

And no, it’s not really goodbye to Finland. I’ll visit in December for a party celebrating Finland’s 100 years of independence. And, of course, I’ll stay in touch with most of these friends for a very long time. Besides, I don’t really believe in goodbyes. Until you die, of course. The big goodbye… But until then, it’s “see you later, Suomi.”

The Defender of Knowledge – Currently, the game’s text is being translated into Finnish, so the final game will be available in both English and Finnish. And we’re in the process of dealing with the various App Store and Google Play Store requirements so the game can be hosted there. But other than that, TDoK is basically done! We showed the final-ish game to the people that hired us, and they seemed happy with it. 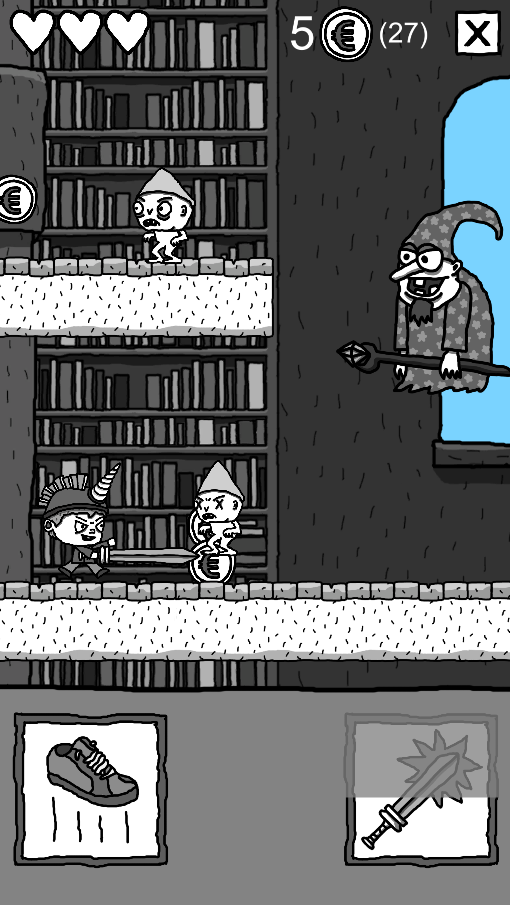 I too am happy with how it turned out. I’d never made a mobile game before, and it was super fun and only whet my appetite to make more. I see a lot of potential for cool, weird interactive storytelling with mobile games, which is something I haven’t seen a ton of (granted, I’m mobile games ignorant, so I’m sure there are some good ones). A mobile device allows for much more simple, and thus much more accessible, player input. My mom will never be able a game on PC, but she can probably play a mobile game. A mobile device also allows a much more relaxed experience, where the player can recline on their couch in the same way they’d experience a book. I think it’s unfortunate that the mobile games market has been dominated by essentially shallow gaming experiences, when there’s nothing inherently shallow about mobile games. But I digress…

If all goes according to schedule, TDoK will arrive on the App Store and the Google Play Store at the end of November. At that point, it will be playable by anyone, though it won’t be relevant to anyone outside of Aalto University, as it’s an educational game which teaches about the University’s library facilities. But if you, dear reader, want to know how to register for your Aalto University library card, do check out The Defender of Knowledge!

The Walking Dead – Tomorrow I start my first day as a writer on Overkill’s The Walking Dead. What a long way I’ve come… It feels like just yesterday I was working in QA, doing basically the same job as thirty other people, wanting desperately to contribute something more meaningful. And now, here I am, helping to write a AAA game being made by 80+ people, with a budget of who knows how many millions of dollars. I can’t begin to tell you how excited I am.