Posted on October 8, 2017 by Jesse Barksdale

I’m sitting in my office on a gray Sunday afternoon, wind and rain beating on the windows, a cup of tea in my hand. Bucket Detective is 28% off for the next couple of days. Get it while it’s hot: http://store.steampowered.com/app/461170/Bucket_Detective/

How To Destroy A Startup – At the end of August we finished and delivered the educational game we were hired to make. It’s called “How To Destroy A Startup” and is a game to teach intellectual property rights law. I’ve been working sporadically on HTDAS since August 2016, so it’s nice to see it finally shipped. Overall, I think the game turned out well, especially given that it was made by two people. It was originally meant to only be used by Aalto University, but now it seems there are a few other universities and organizations interested in hosting the game, so that’s nice.

The Defender of Knowledge – After finishing HTDAS I started full time on another educational I was hired to make. This one is called “The Defender of Knowledge” and is a game to familiarize students with the library facilities available at Aalto University, the University at which I study. It’ll be used in a mandatory course taken by all first year bachelor students, so we’ll have several hundred, if not thousands, of players each year. The prompt we were given was that this course is Aalto University’s “most boring course” and could we create a game to make the course less boring? 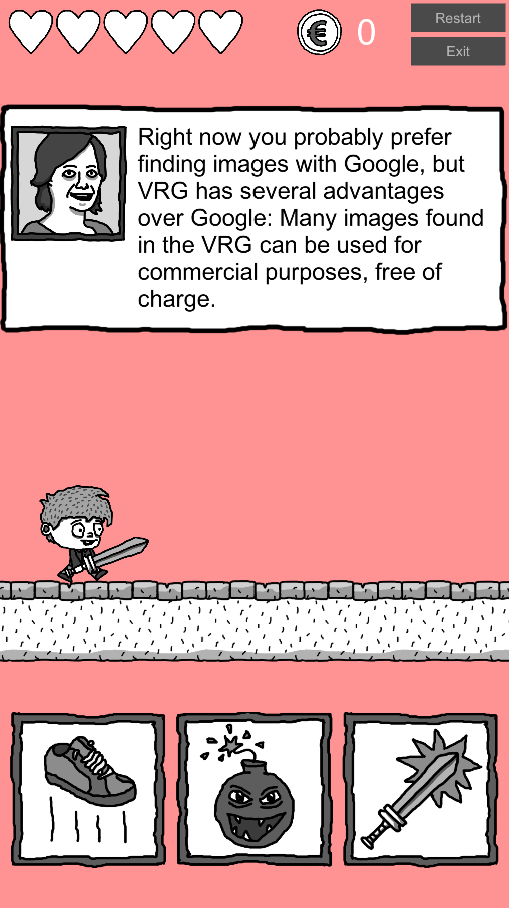 TDOF is a mobile game for iOS and Android (the first mobile game I’ve ever made) and an action game (the first action game I’ve made in a long time), so it’s been a great learning experience. In TDOF, you play as a student at Aalto University who must stop the “soldiers of ignorance” from destroying the university’s library. It’s a platformer where you jump and attack, modeled after games like PostKnight and Super Mario Run. As you progress through the various levels, you learn about the tools and facilities available to you as a student. You also collect coins and can buy pets, weapons, armor, and even new hair (you heard me) to enhance/customize your character. The core elements of the game (the levels, mechanics, and learning content) are done, and we’re in the polish phase, making everything “work” and I’m putting in as much art as I can before we deliver it at the end of October.

Overkill’s The Walking Dead – At the beginning of September I accepted an offer to be a writer on the new The Walking Dead game being made by Starbreeze Studios. Though I’ve enjoyed working freelance for the past fourteen months, it’s time for me to make this move. Making educational games has been great. I’ve had the flexibility to set my own hours and to work from wherever I wanted. In doing a variety of jobs (art, level design, and writing), the work never got stale, and I’ve learned a huge amount about drawing, animation, design, and even team management that I hadn’t known before. But with flexibility and variety comes sacrifices.

For one, I’ve felt the need to specialize and refine my skills. Both in my personal projects (the static speaks my name, Bucket Detective, etc) and in my freelance work, I’ve spread myself thin. Cultivating skills in art, design, programming, and writing has been valuable, and has made me much more hire-able. It’s also allowed me to see exactly which of those skills I wanted to further develop, and which of those I should leave to “the professionals.” Though I love drawing and animating and designing game mechanics, a nagging voice kept telling me that those weren’t the areas in which I was meant to specialize. That if I wanted to take my work to the next level, I should focus on the area at which I’m the best and the most interested.

And writing for The Walking Dead will allow me to do just that. I’ll focus on writing and storytelling and instead work alongside artists, programmers, and designers who are top of their field, each of us using our work to elevate the work of the others.

There’s a ton I want to share about the new job, but of course, working for an AAA studio comes with much stricter privacy requirements than my own projects, where I can post whatever/whenever I feel like. I also haven’t actually started yet, so there’s a lot about the job I simply don’t know.

concept art i found online, which I assume is real?

I can, however, share details about the game which are already public: Overkill’s The Walking Dead is a co-operative multiplayer first-person shooter. It’s by the same developers who made Payday 2 and Dead By Daylight, so it’s a genre they know how to do well. It’s scheduled to come out in about a year and will be available on PS4, Xbox One, and PC. I can’t express how excited ten year old Jesse is to be working on a game coming out on a console. That alone is worth it.

If you want to know more about the game, there’s more info here: http://www.overkillsoftware.com/games/overkills-the-walking-dead/

I know that writing for video games is something a lot of people want to do, so I’ll share whatever of the job/process I’m able to. If you have questions, let me know (my email is in the About page). It might be a while until I can answer them, both because of NDAs and because I haven’t yet started, but if you let me know the topics you’re curious about, I’ll look out for an opportunity to discuss them.

Goodbye, Nancy – I made a recording of a short story I wrote called “Goodbye, Nancy.” Douglas Lamb then made some amazing music for it, and I recorded a video of me walking the distorted streets of Helsinki. For what it is, I think it turned out well. It’s on YouTube if you want to check it out. (Don’t worry, there won’t be a crowd. Only 38 people have watched it so far.)

The Short Fiction Challenge – To push myself to write and release faster, I gave myself a “short fiction challenge” where I would write, polish, and publish one new short story a week. The idea wasn’t to write something great, but simply to write and complete something. It was a great exercise, and I think the stories turned out okay. In general I’m not a huge fan of short stories, because I prefer longer stories like books and movies, but I think the stories I wrote had some interesting ideas in them, or at least seeds of ideas. If you want to read them, hover over the Writings tab at the top of my site and click on any of the stories which have SFC next to them.

After three weeks of writing, however, I had to stop. It was around the third week that I found out about my new job, which meant I had to put my time and energy into shipping two games, writing my thesis, and graduating before moving to Stockholm in November. So far, one game is done, but the rest of my tasks remain, along with me actually moving from Helsinki to Stockholm. ;-0

Ok, that’s it. I’m off to read and clean my apartment and play Overwatch, which, if you haven’t played yet, is amazing. Like, so, so amazing.