AMAZE FEST – At the end of April I flew to Berlin to show Bucket Detective at AMAZE Fest. The festival was great and was the perfect balance between being well run and having a soul. We demoed for four days and had, at least, twenty people play the game from start to finish. The game was in competition in the narrative category. We didn’t win (Orwell won in that category), but as they say, it was cool just to be nominated. If you get a chance to check out AMAZE, either as a developer or not, I recommend it.

NO GAMES FOR A WHILE – For now it doesn’t look like my next personal project will be a game. Yes, there are still games I want to make, and I’d be surprised if I never make another game, but my focus has shifted. I do think that interactive storytelling has a huge potential, and it’s an area I still want to be involved in, but I only have so much time.

Bucket Detective development showed me this more starkly than ever before. Six months into development, practically ever quest, puzzle, character, and story element had been codified into a 25+ page design document. It then took more than a year to implement, and most of that was, honestly, painful and painfully slow. If I had a bigger team or funding, it would have been faster and more fun.

And even with a team, making a game takes for fucking ever. Especially the kind of games I make, where each each puzzle, each art asset, and each line of dialogue is derived from the story and needs to be unique and handmade. Rogue-likes are popular for a variety of reasons, but one reason is that they are able to be made by small teams, relatively quickly, and played by players for a potentially infinite amount of time. That’s not to say that making rogue-likes are easy (it’s actually incredibly hard to make a good rogue-like), just that they are a type of game that is perfect for small teams. The original Binding of Isaac, for instance, was made by two people in three months.

When developing my games, working on the story is always my favorite part – from creating the world, to scripting cutscenes, to coming up with bizarre book titles. So for now, I’m going to focus on writing stories. At the moment that means writing short stories and novels, which will allow me to focus on what I’m most interested in, and also what I think I’m best at. 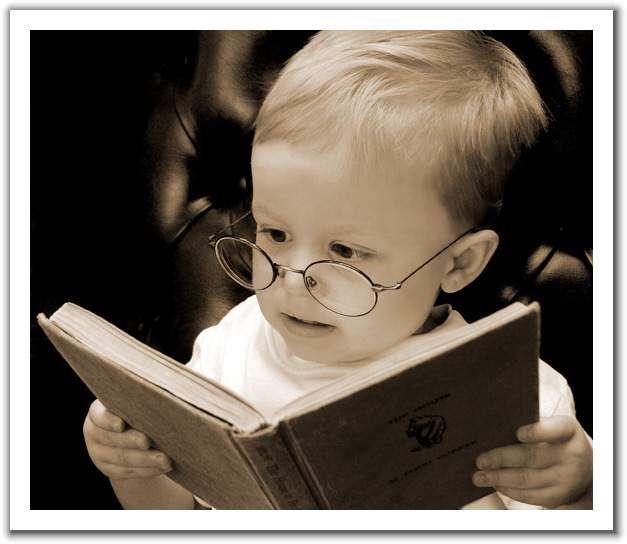 That’s not to say that I’m leaving games. Maybe there’s an interactive novel or a story-focused game in my future. And I’ll continue to work in games as a career, because it really is a fun and thriving industry to be involved in. It’s just that I’m going to be focusing more singularly on stories, instead of trying to be a writer/designer/artist/project manager.

NEW STEAM ART – While skimming through our Steam stats I noticed that our clickthrough rate from the front page was very low. What this means is that when Steam users see Bucket Detective advertised on the front page, the percentage that click on it is very small. Like less than 1%. As someone who hates clickbait, I’m reluctant to market anything in a way that feels clickbaity, but honestly, our Steam marketing art was terrible. I used that art because it was our titlescreen art, but advertising the game using a pale blue wall speckled with barely readable post-it notes was a bad idea. So after a few months of uncatchy art, I reached out to Kitt Byrne, who did our cutscene art, and asked her to make us something. We sent design ideas back and forth for a few days, and what we ended up with is amazing. Not only is it way more eye-catching, but it’s far more representative of the game’s tone and content. 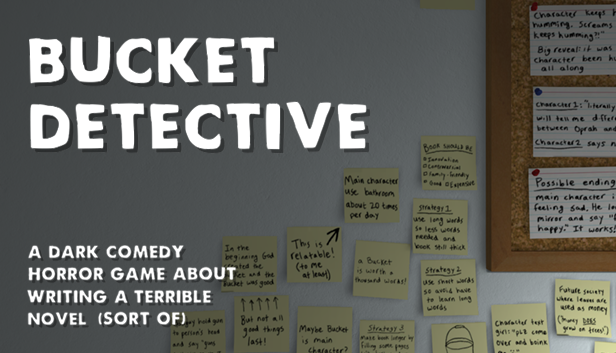 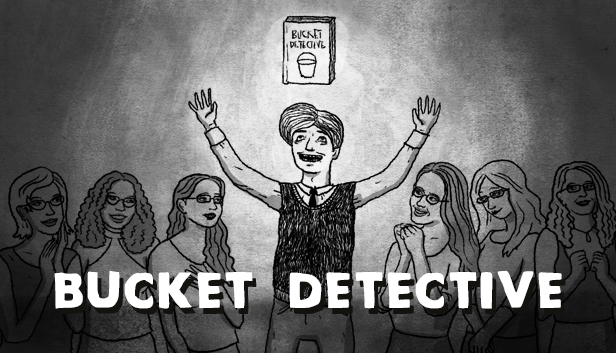 Which would you rather play?

OUR FIRST SALE – A few weeks ago we had our first sale on Steam. For one week the game was discounted at 25% off, and it was a huge success. That’s not to say we sold millions, but the game had it’s most successful week since launch. It’s funny that a game which costs $3.99 would have a “huge week” by knocking $1 off its price tag, but such is the Steam economy. It seems that in the eyes of Steam customers, simply being on sale is more attractive than a non-discounted game at a reasonable price. If I were to release Bucket Detective all over, I would price the game higher, then expect the majority of my sales to come during discounted periods. It’s strange, but when has the economy of the internet ever been rational… 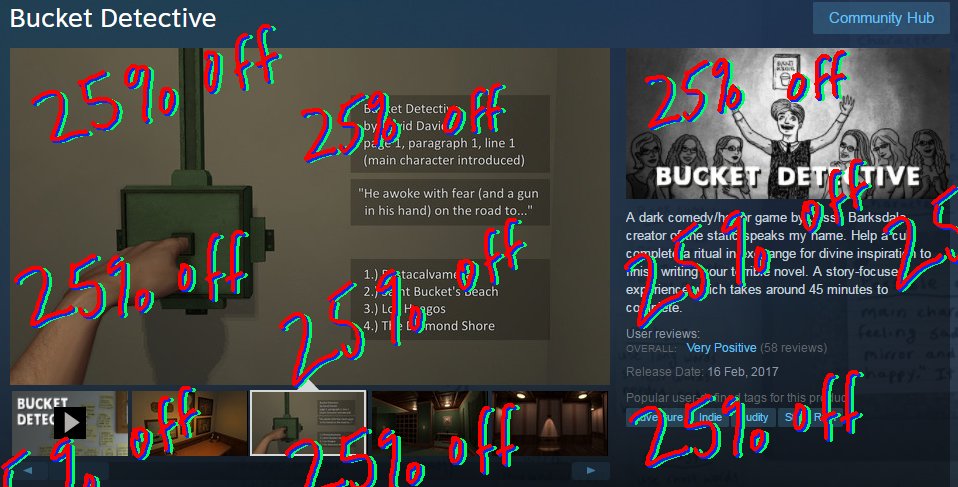 THESIS – I’ve been working (slowly) on my thesis, which will be a post-mortem style analysis of Bucket Detective. The idea is to have a breakdown of the process of making the game, from design to production to burn out to release, that is useful to someone who who wants to make and release their first game. Whether it will actually be useful, or will merely fulfill the final requirement for me to graduate, is to be seen.

WORK – Next week I start working full time. I feel lucky to have five months of full time work already set up, especially when the work isn’t totally terrible (I’ll be designing two different educational games). This post is already long, so maybe I’ll talk more about my job, and my interest in educational games, in another post.